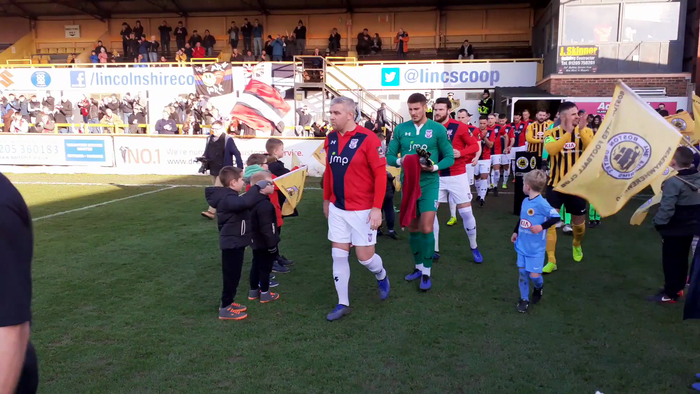 On a sunny February afternoon, 14 of our children went along to proudly represent the school as official flag-bearers before the match. We paraded around the pitch while the teams were warming up and lots of the spectators clapped us as we went round. Then we stood in line to form a 'guard of honour', waving our flags enthusiastically to welcome the players and match officials onto the pitch at the start of the game, which we watched from the main stand. For most of the children, it was their first ever 'real' football match!

With 3rd-placed Boston Utd (aka 'The Pilgrims') playing 2nd-placed York City, it promised to be a gripping encounter and the game certainly lived up to expectations. York scored a lucky early goal after 7 minutes when the home defence got themselves into a real mix-up but Boston battled hard and scored a deserved equaliser, making the score 1-1 at half time.

In an entertaining second half, both teams hit the crossbar and had other chances before Boston scored again after 70 minutes. Ten minutes later, the Pilgrims sealed their victory with a long, curling cross which sailed over the York goalkeeper and into the net. The whole crowd (except the 400 York fans!) were on their feet clapping and cheering. Celebrations were repeated at the final whistle as the 3-1 victory means Boston's push for promotion continues.

It was a really memorable afternoon for our children and their families. They were all given a goody bag and the club kindly presented the school with the engraved plinth in the photograph. Many thanks to everyone at Boston United FC for making us feel so welcome; good luck for the rest of the season and perhaps we can come and see you again in your new stadium

Our children are doing SO well, learning various self-defence moves. It's really a joy watching them explore this new activity and develop their confidence!

In September, we had a great afternoon when Peterborough United FC came to school. As part of our drive to increase the number of girls playing football, 3 of their coaches spent an hour training ALL of our KS2 girls; firstly some skills work, followed by mini-matches.

This was followed by a whole-school assembly, where there were 2 amazing surprises: the club kindly gave every single child & adult a voucher for 2 free match tickets and then we met 'Peter Burrow', the official club mascot. Our children looked after Peter's enormous carrot while he was learning to floss with the teachers. The adults definitely weren't as good as the children! On the way out of assembly, there was a High 5 or hug for every child.

Lincoln Judo Academy came into school to get our new year off to an exciting start! All our Y1-Y6 children put on the jacket and had a go at pinning a partner down. Then some children even managed to throw the instructor onto the mat! It was great to see so much concentration and so many smiles - many children have since joined our KS2 Martial Arts Club on Thursdays.
Top